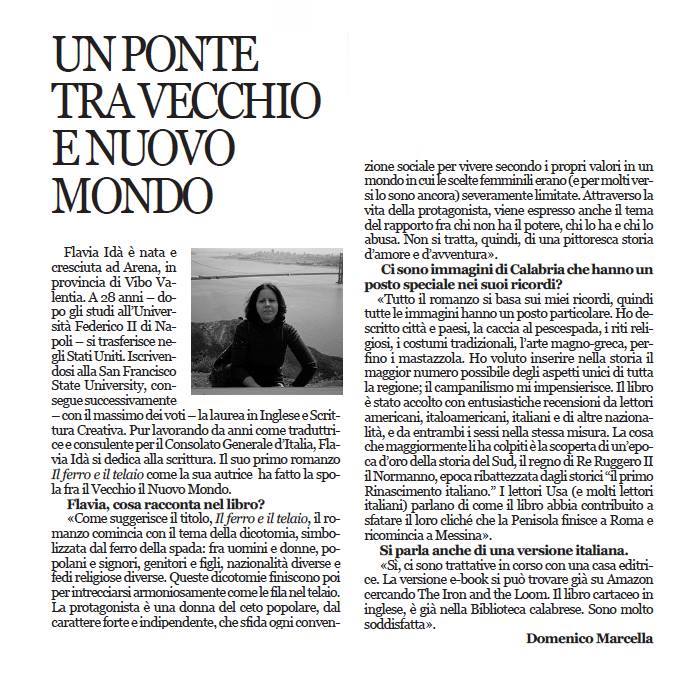 Flavia Idà was born and raised in Arena, Province of Vibo Valentia. At the age of 28, after her studies at the Università Federico II in Naples, she moved to the United States. She enrolled at San Francisco State University, where she obtained her Degree in English and Creative Writing, summa cum laude. While working for many years as a translator for the Italian Consulate General in San Francisco, she devotes herself to writing. Her first novel, The Iron and the Loom (Il ferro e il telaio), like its author has gone back and forth between the Old World and the New.

What do you narrate in your story?

As the title suggests, the novel begins with the theme of division, symbolized by the iron of the sword: division between men and women, lords and commoners, parents and children, different nationalities and different religious faiths. By the end of the novel all these divisions come together harmoniously like threads in a loom. My protagonist is a woman of the common people, strong and independent, who defies all social conventions in order to live her life according to her own principles in a world where women’s choices were (and in many ways still are) severely limited. Thru her story is expressed also the theme of the relationship between those who have power, those who don’t have it and those who abuse it. In short, it’s not a picturesque tale of love and adventure.

Are there images of Calabria that have a special place in your memories?

All the novel is based on my memories of my land, so all the images have a special place. I describe cities and towns, religious festivals, traditional costumes, Magna Graecia art, the swordfish hunt, even mastazzola. I wanted to include as many aspects as possible of what is unique to all our Region; I find campanilismo worrisome. The book has been welcomed with excellent reviews by Americans, Italians, Italian-Americans and readers of other nationalities, and of both genders in the same proportion. What seems to have struck them the most is the discovery of a golden era in the history of the South, the reign of the great Norman King Roger II, which historians call “the first Italian Renaissance.” American readers (and Italian readers as well) talk about how the book has contributed to debunk their cliché that the Peninsula ends at Rome and starts again at Messina.

There is talk of an Italian version.

My Italian version is currently with a publishing house in Italy. The paper book in English is shelved in the Biblioteca Calabrese.